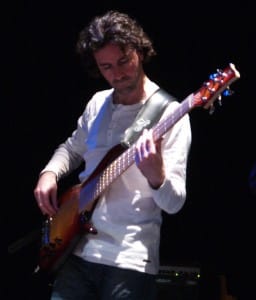 Pierre-Henri Pin started playing bass in high school, studied jazz, improvisation and arrangement writing at the conservatory. He has played in many rock, jazz and latin music bands. He recorded the album ” Chants des Dunes ” with the rock band Alysse in 2006, the album ” Entre deux Mondes ” with the band Ekynox, on which he sings and wrote most of the lyrics.

Since 2009, he has been devoting himself to his personal project, under the name of Pierre Cravan. He recorded the album ” Le Vol Blanc de l’Effraie “, on which he sings and plays all the instruments. He regularly plays with his band in Parisian venues.